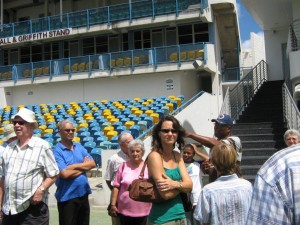 Although the BSTA is mainly concerned with agriculture and agricultural issues, its members are also involved in diverse activities and are members of other organisations with different interests ,such as the Barbados National Trust and other community service organisations.

The group recognizes the importance of keeping abreast of other activities in Barbados and does this by meeting every two months on average for a Saturday Field Tour. Some of the tours have an agricultural focus, but many identify with other areas such as heritage, tourism, sport, and solid waste management.

Last year we visited Kendal farm in St John to see the dairy and sheep operations. The facilities there are modern and well managed. The Canadian Holstein dairy herd is kept indoors, with additional cooling provided by fans to assist in keeping the milk yield at an optimal level. Milking is of course done by machine. Corn is grown on a large acreage to produce silage for feeding the animals. Haylage and concentrates are also fed.

The farm practices water conservation, with all the rainwater from roofs being harvested and fed into a large pond. This water is used for cleaning the facility, and the resulting wash water is then used to fertilise the pastures.

The Blackbelly Sheep flock numbers about 700. They are grazed on the pastures as well as fed concentrates. Breeding as well as fattening is done on farm.

More recent tours included the Arlington Museum in Speightstown, where modern technology is used in the interactive exhibits. The building is an 18th century ship chandler’s house , and is one of the oldest surviving properties in Speightstown. It is interesting to note that Speightstown got its name from William Speight , a wealthy businessman who was a member of the first Barbados Parliament in 1639.

The displays in the museum depict many aspects of the history of Barbados, including life in Speightstown, the slave trade and plantation life. There is also an area which is designed specifically for children where there is a talking pirate, and where children can virtually navigate a schooner across the Caribbean waters.

Last Saturday the Society visited the National Heroes Gallery in the West Wing of Parliament. We were treated to a well conducted tour where the history of Barbados was traced, with emphasis on the invaluable contributions made by the ten National Heroes. Each hero was depicted in unique iconic fashion by a local artist.

From there we visited the nearby Satjay Bridgetown Centre on Victoria Street, the newest mall in the city, having been opened by the Prime Minister earlier this year.

In keeping with significant public sector infrastructural developments carried out in Bridgetown over the past three decades, Satjay Bridgetown Centre has maintained consistency with these developments by providing a contemporary shopping centre, facilitating shopping, entertainment, socializing, dining and other services – for locals and visitors alike.

Another part of history which the BSTA visited on one of its tours was the HARP Gun located at Paragon in Christ Church. The gun was the central feature of the High Altitude Research Project, a joint project of the United States Department of Defense and Canada’s Department of National Defense carried out in Barbados in the 1960s. Its goal was to study the ballistics of re-entry vehicles at low cost using a non-rocket space launch method based on a very large (16â€) gun to fire the models to high altitudes at high speeds.

More recently, the group was taken on a guided tour of the new Kensington Oval and were quite impressed by the facility. Following this was a tour of the Cricket Legends of Barbados Inc at Herbert House in Fontabelle. There they were able to chat with two Legends, Philo Wallace and Vasbert Drakes, and to see the beginnings of a cricket museum as well as some of the memorabilia and publications available for sale.

The visit to the Concorde Experience at Spencers, Christ Church, one of Barbados’ newest tourism attractions, was fascinating. The legendary British Airways Concorde G-BOAE or Alpha Echo , the landing and taking off of which attracted many spectators over the years, has now come to rest in Barbados and is worth a visit from all Barbadians. Visitors to the attraction learn how the Concorde technology was developed and how it differed from other aircraft.

Last but by no means least, we familiarized ourselves with an issue which is very topical these days- that of solid waste management. We visited the Mangrove Pond land fill to see how the disposal of solid waste is organized. Later this year we hope to visit the Recycling Centre at Vaucluse to observe the efforts being made to divert as much waste as possible from this landfill and to recycle as many products as possible.

What we have discovered, is that in addition to the seven local festivals, there are at least nine museums and heritage sites which can be used to promote our tourism industry.