The importance of food security for Barbados was recognized many years ago, especially during the Second World War when shipping was under threat and imports of food could not be relied upon. Local farmers were encouraged to increase their production of food crops and reduce the islandâ€™s reliance on overseas shipments. They responded positively and the effort successfully took Barbados safely through some difficult times. 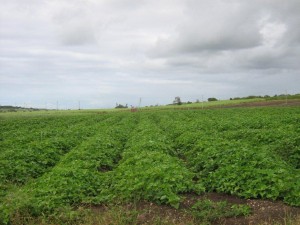 Sweet potato was one of the main crops planted at that time, the others being cassava, yam, eddoe and corn. In fact during the war when rice was not available, the so called â€œbig grain riceâ€ produced from sweet potato was a very popular food. From that time until now sweet potato has been an important staple food for Barbadians. The production of the crop has evolved from a rain fed intercrop with sugar cane to an irrigated, mechanized pure stand crop.

Successive governments have continued to emphasise the need for food security, with the present Prime Minister in his Financial Statement and Budgetary Proposals presented earlier this year , stating that the Barbados Agricultural Management Company (BAMC) would be increasing its area of food production up to one thousand acres over the next five years. One of the crops listed to be planted by BAMC is sweet potato.

But the success of any such food security programme will depend, not only on increased acreage, but increased productivity and efficiency of production in order for farmers to make a reasonable profit while providing food at a fair price. The fact is that since 2001 sweet potato in Barbados has been severely affected by a problem which can result in zero yield. Perhaps the presence of this problem may be responsible for the 54% decrease in production of sweet potato between 2001 and 2007 reported by the Statistical Department and the Ministry of Agriculture in the Barbados Economic and Social Report 2007.

The question we are asking is â€œWhat is being done about this problem?â€ Around 2003 two pathologists from Ministry of Agriculture, together with a scientist from the International Potato Centre (CIP) in Peru carried out research into the problem and reported that at least three viruses were present. The report concluded that in order to reduce the spread and further impact of this new disease, authorities would have to institute domestic quarantine and other disease management strategies. It further recognized that the high incidence of the virus was due primarily to planting infected cuttings and that there was an urgent need to develop a virus free seed programme for Barbados, from which farmers could obtain clean planting material and that further work was needed to properly identify the viruses affecting sweet potato in Barbados.

During 2005-2007 in its sweet potato research and development programme the CARDI laboratory used meristem tip culture to initiate work towards generating virus-free sweet potato material and to multiply clean planting material for the farming community.

However, far from any further positive developments on this front, we were shocked to learn of the closure of the CARDI laboratory and the disposal of the virus free cultures stored there. How could this have been allowed? We have heard nothing of results of any further research on the disease by the Ministry of Agriculture and as far as we understand, the attempts by a large sweet potato grower to import clean planting material were discouraged, with the understanding that the Ministry would supply clean material. However, nothing further has been heard of this plan.

How can the farmers in Barbados be expected to respond favourably to the request of the government to achieve self sufficiency in food crop production and lower food prices when they are not being given the necessary technical support? If we are to have a sustainable agricultural industry we need the relevant research to be undertaken by the Ministry of Agriculture and the results extended to farmers so that they can engage in the type of efficient production which is necessary to achieve governmentâ€™s goals.
Instead we hear that one of the Pathologist posts at the Ministry of Agriculture has remained vacant for some time while the only Pathologist appears to be more involved in administrative duties than in research or diagnostic work. And the sweet potato problem and many other disease problems continue to be unsolved. Isnâ€™t that shameful?

Why canâ€™t a National Sweet Potato Development Programme be established, involving all those scientists who are able to contribute, similar to the approach taken many years ago to the Blast disease in onions? After all, sweet potato is important to the nutrition of our nation. Do you care?