Local farmers must pay attention to soil management so as to conserve our valuable topsoil.

Soil is composed of four elements:  mineral particles, organic matter, water and air. Fifty to eighty percent of the volume consists of mineral particles which form the skeletal structure of most soils. In addition there are countless soil organisms that together support life on earth.

Soil has four important functions It’s a : medium for plant growth; a means of water storage, supply and purification; a modifier of earth’s atmosphere; a habitat for organisms; all of which, in turn, modify the soil

Topsoil is the upper, outermost and most fertile layer of  the soil, usually the top 2 to 8 inches. Actual depth of the topsoil layer can be measured as the depth from the surface to the first densely packed soil layer known as subsoil. 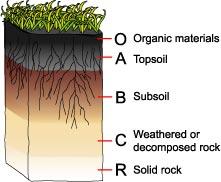 Every activity in the important agricultural sector is crucially dependent (rooted) on top soil, whether forages for animals or crops for man.  It has the highest concentration of organic matter and microorganisms  and is where most of the  earth‘s  biological soil activity occurs. It’s also susceptible to erosion, so must be managed effectively to prevent this.

Good soil management aims at minimizing erosion, maintaining adequate levels of air through tillage, water through rain and irrigation and organic matter through incorporation in the top soil.

Management of top soil in the tropics differs to that in more temperate climates because the rates of decomposition of the organic matter and soil erosion are higher  because of the higher temperatures in the tropics.

A major erosion control technique in the tropics involves the use of organic matter as mulch or cover on the soil surface where it will reduce erosion, conserve soil water and decompose slower than if it was mixed or integrated into the soil.

The Barbados Society of Technologists in Agriculture (www.bstabarbados.org) is a body of agriculturalists concerned with the promotion of sustainable agriculture through the use of technology and science for the benefit of all stakeholders. Find us on facebook.